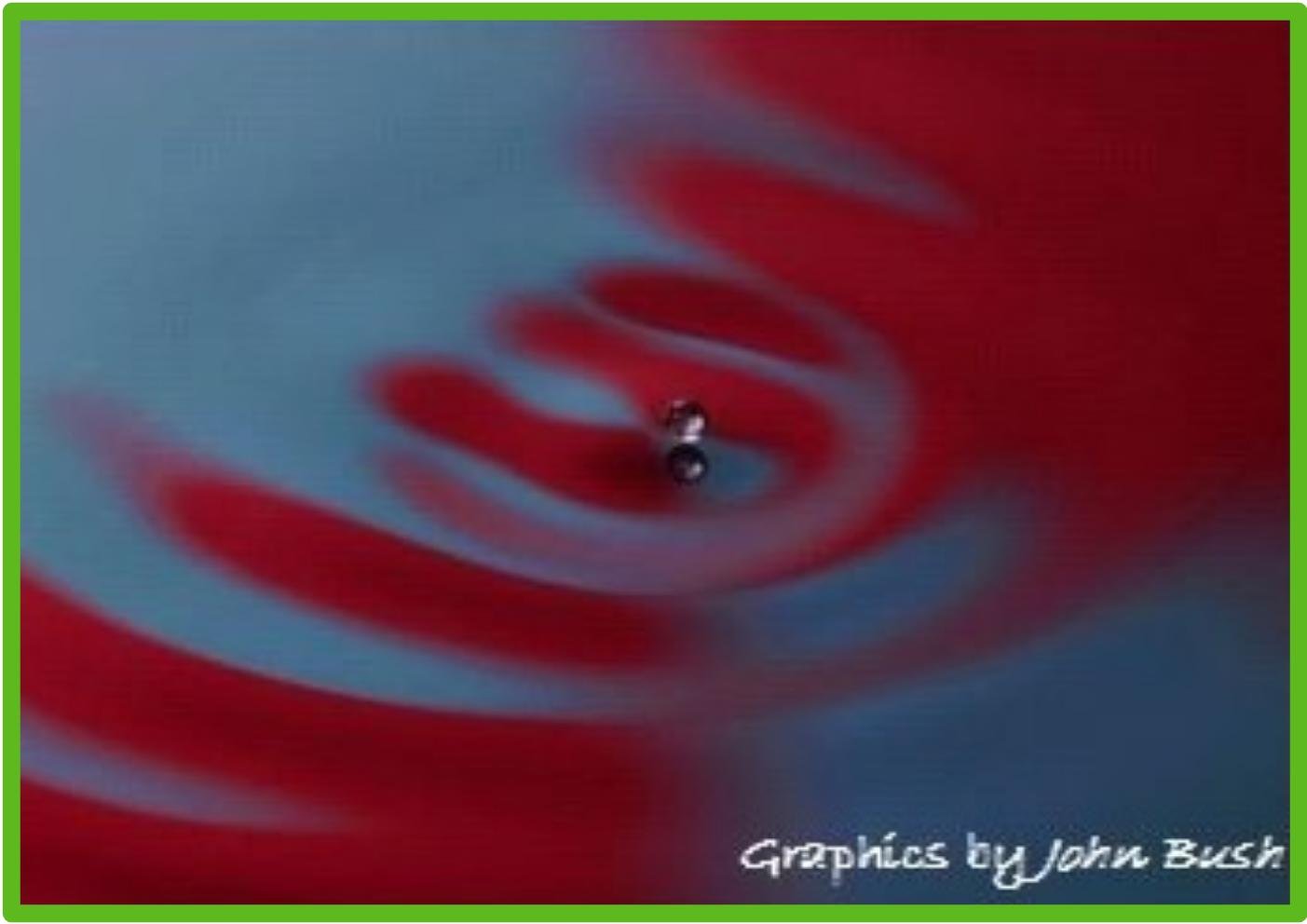 In the case of the jumping oil drop

According to the interpretation of classical, orthodox, Copenhagen, or Bohr quantum mechanics, particles traverse all possible realities before reaching their destination. In fact, they are not talking about particles, but probability waves. These probability waves collapse and become particles when and only when we try to measure or observe (!) Them. "Quantum mechanics are contrary to common sense, and that's how we have to breathe it," says Seth Lloyd. 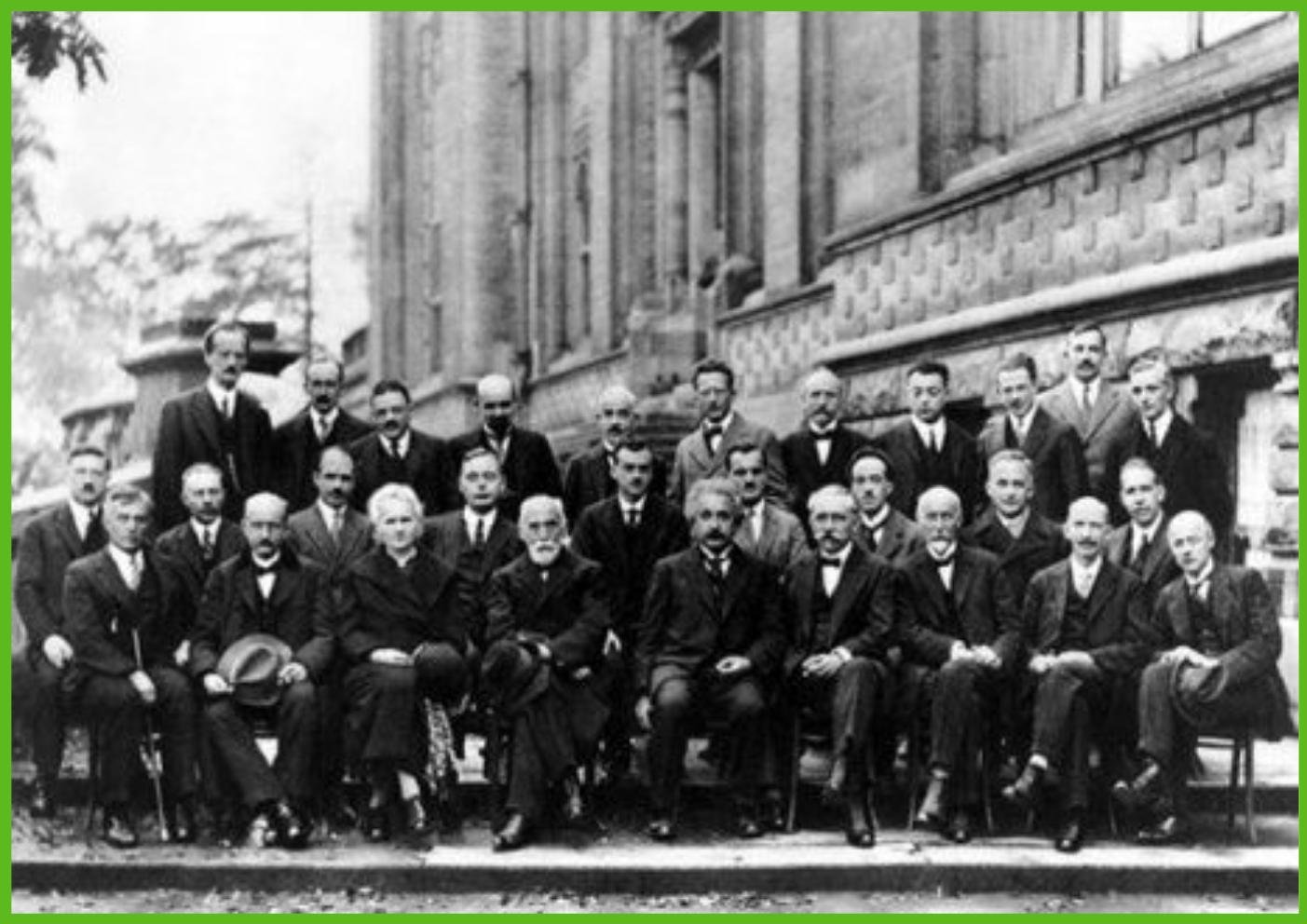 What the above theory and process description would be other than the inexhaustibility and death of human logic. Scientists in the field even claim many similar incomprehensible things. "For nearly a century, 'reality' was a vague concept. The laws of quantum physics suggest that particles spend most of their time in a state of mind, even without basic properties like the exact situation, instead they are everywhere and nowhere at the same time. Only then, if we measure them, they materialize suddenly, seemingly taking a position as if their place were given by the randomness of a roll of the dice. " says John Bush.

It was Einstein and Schrödinger who never gave up hope that the matter would continue to be seen not as spirits but as real. Unfortunately, they were in the minority, fighting almost alone. Meanwhile, the mathematical veil of statistical mathematics and illogical philosophy covered the field of quantum physics. Now, however, a ray of hope has emerged, a new experimental result that will perhaps illuminate the darkness. The illuminating light beam did not emerge from the brains of physicists, but from the laboratory of hydrodynamic specialists.                         [N.W.] 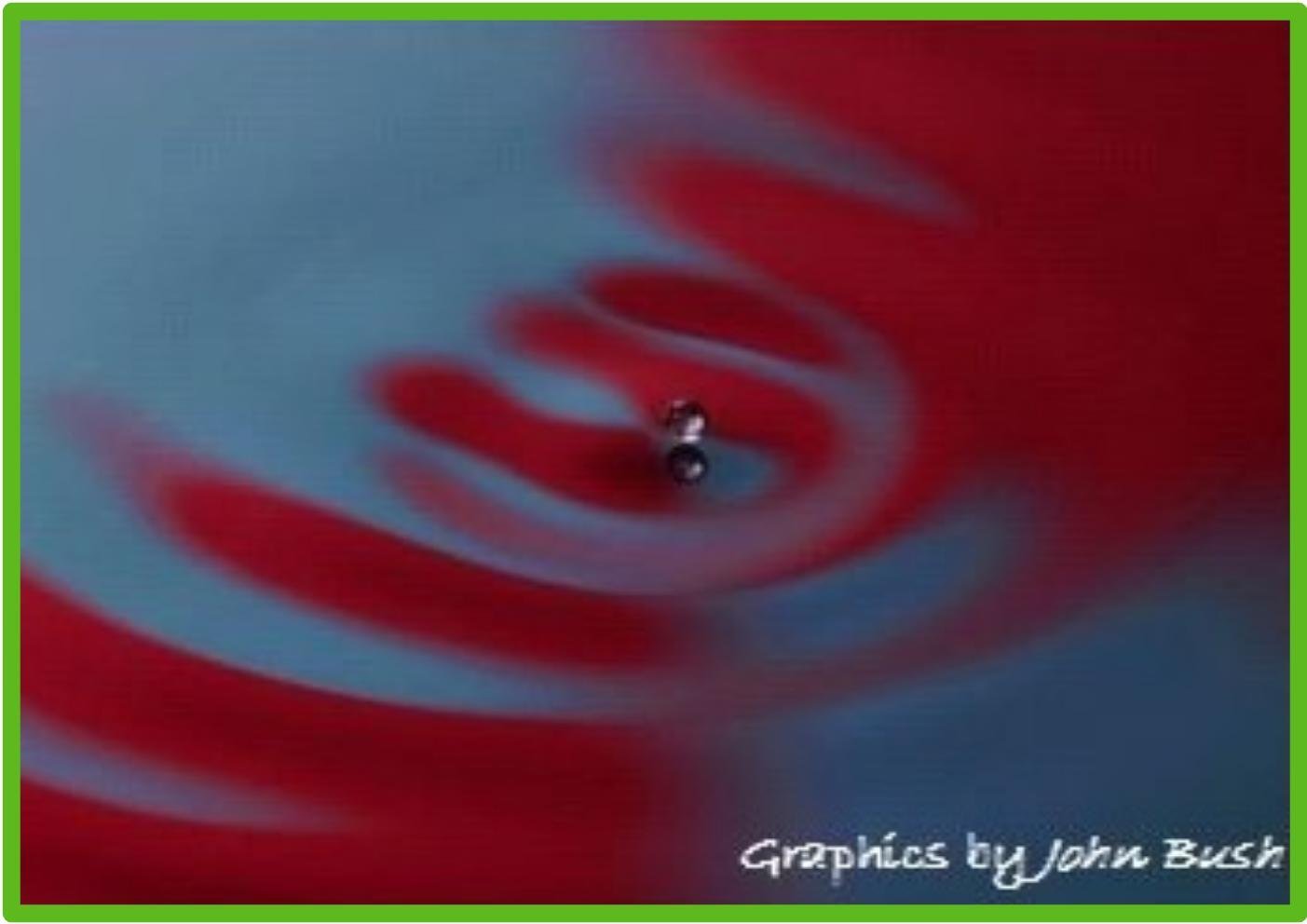 Before examining the phenomenon in more detail, we still need to make a detour in the direction of background energy. Where does the droplet get its energy for endless jumps? There could be an explanation that when he falls, he arrives so happily on an existing wave that he transfers energy to him. But then the opposite can happen. For the bounce to never subside, some background energy and even background vibration are essential. In the world of elementary particles, however, it is known that there is in the background an infinitely high-energy physical vacuum, in the correct usage of the aether, that makes vibrations in every cartilage. It can provide as much energy at any time and for as long as it takes to jump indefinitely. Current official quantum physics is also about uncertainty and background vibrations, albeit without indicating the source.                               (Tt)

There must be an invisible entity behind most physical processes, and without its energy certain processes are inexplicable. Let's face it, this kind of entity cannot be dispensed with, and for this reason, its existence can be considered proven. A confounding factor in "modern" physics is the occasional energy surplus. For centuries, the law of conservation of energy has been sacrosanct. But it is flawed because it does not include the energy of the invisible ether. Once you do, you will no longer have a problem with the energy of the cluster that appears. The present law of conservation of energy should be renamed the law of reduced conservation of energy, and the system with the addition of ether should be renamed the law of full conservation of energy. (This designation is also temporary, as more background energies may emerge in the future.) What is special and unusual, and even unbelievable, is that particles are located at discrete energy levels, can penetrate insurmountable obstacles, are formed spontaneously, or are destroyed spontaneously. At present, the existence of a high-energy vacuum lurking in the background is not accepted. However, by accepting the high-energy aether and the guiding wave, we can now obtain explanations that have a normal internal logic and are plausible.                                         (Tt) 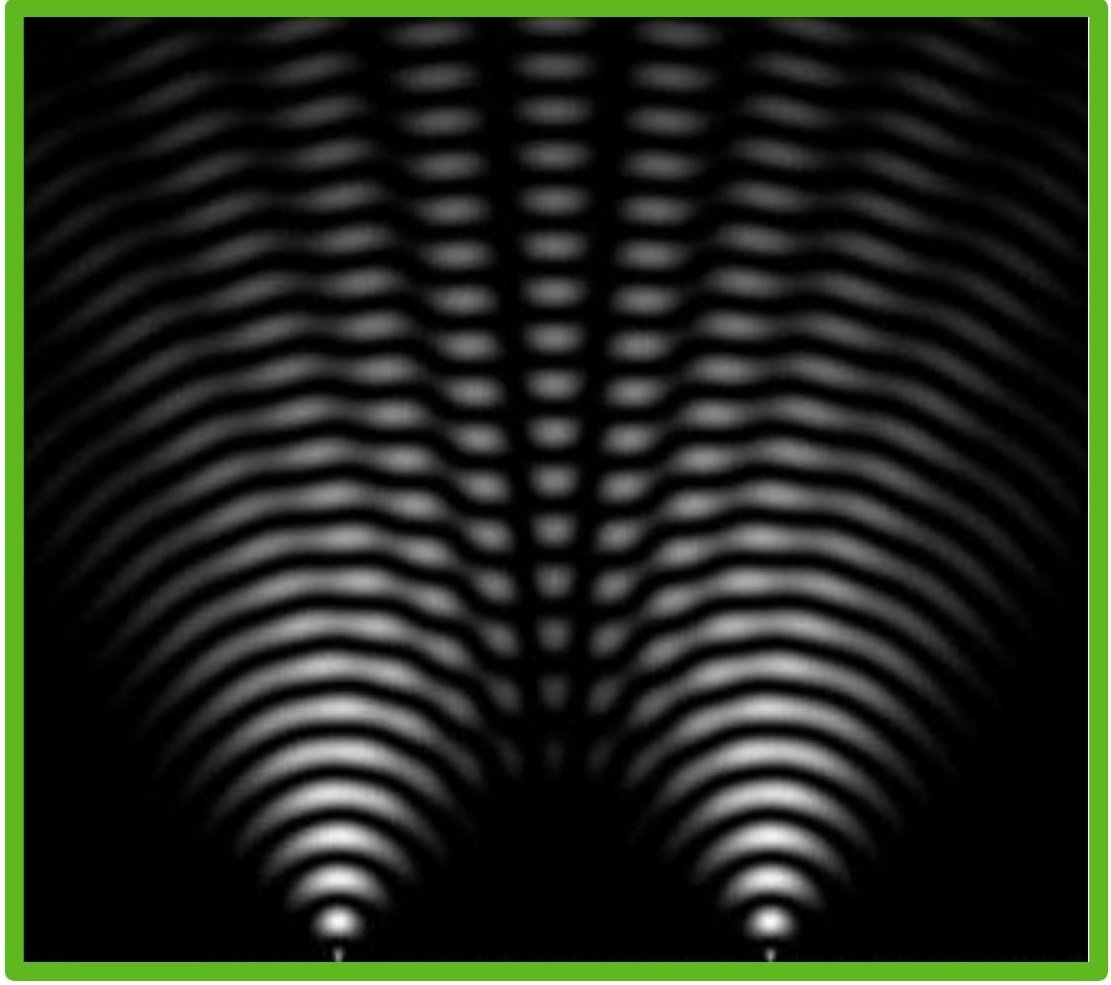 After this short detour, let’s look at a famous but problematic experiment.

An old, much-analyzed observation is the so-called two-slots interference experiment. A light beam or electron beam is launched in the direction of two slits above each other. By covering one of the slots, the image of a light bundle appears as a spread-out blob on the umbrella behind it. The upper and lower parts of the spot are scattered light because the material of the slit bends the waves towards itself. This is because the waves at the edge of the beam enter the force field of the atoms forming the slit and are bent in the direction of the atoms, causing them to spread out. (Light waves in a force field, see here!) When we open both slits, you get what are effectively two light spots on top of each other. The umbrella, however, will not be uniformly illuminated but will show light streaks and dark streaks. Fourfold brightness stripes appear where the paths of intersection are an integer multiple of the wavelength, so they arrive at the umbrella in the same phase. Where they arrive in opposite phases, they cancel each other out, and a dark stripe appears on the screen. This streaking can only occur for waves, not for point particles. The photons and electrons are however not simple particles, they are particles riding on waves. Their behavior is determined by the waves. Waves form invisible streaks, which are displayed by the particles they guide. If we cower one of the slots, then we essentially eliminate one-half of the interference-prone waves, making it impossible for interference to occur. The photons that pass through the remaining open slot might be sufficient to illuminate the stripes, but there are no stripes. They are evenly distributed on the umbrella, giving a uniform patch of light.                                                  (Tt)

Guide wave theory will give the right solution. According to this, the particle bounces along its path and creates another wave with each jump. They expand circularly, travel at the speed of light, and of course, pass through both gaps. When the particle then passes through one of the slots, it finds itself on its own interfered waves and continues to bounce under their control. After all, the interference image also forms on the screen. If one of the gaps is now covered, then the remaining guide wave has nothing to interfere with, the light strip system does not form. The Copenhagen trend called the classic, explains this by the extremity that interference collapses when the phenomenon is observed or measured. This was already a lot for Einstein, he did not accept, although in other places He himself liked to use the overly abstract line of thought.                     (Tt)

It was once surprising for R. Feynman to assume that a photon or lightwave travels in all directions in space at once, but only reaches a single point. It may be a question of what will happen to the other waves that have gone astray. Another big question is what the thing looks like energetically, as the waves that went “wrong” carried energy away. Yes, because these waves absorb energy with each formation. In this way, the process requires extra energy that today’s physics cannot account for. Therefore, the radiation process is a clear violation of the principle of conservation of energy. According to ether theory, however, the excess energy is provided by the ether of infinite energy. The bouncing particle, on the other hand, has a good energy balance when it reaches its destination. This energy transfer process is not a problem for the ether. It’s like standing on the shore of the ocean and we would carry the water out with a thimble. The water level will not change and we should not have to worry about where the water is from.                                         (Tt)

At the Solvay conference, Einstein objected to the probabilistic universe and joked that "God does not play a dice-dice game," however also opposed de Broglie's alternative. It could be this may have been because in 1932, when the Hungarian-American János Neumann "proved" that the statistical probability wave equation could not have other hidden variables.                           [N.W.] 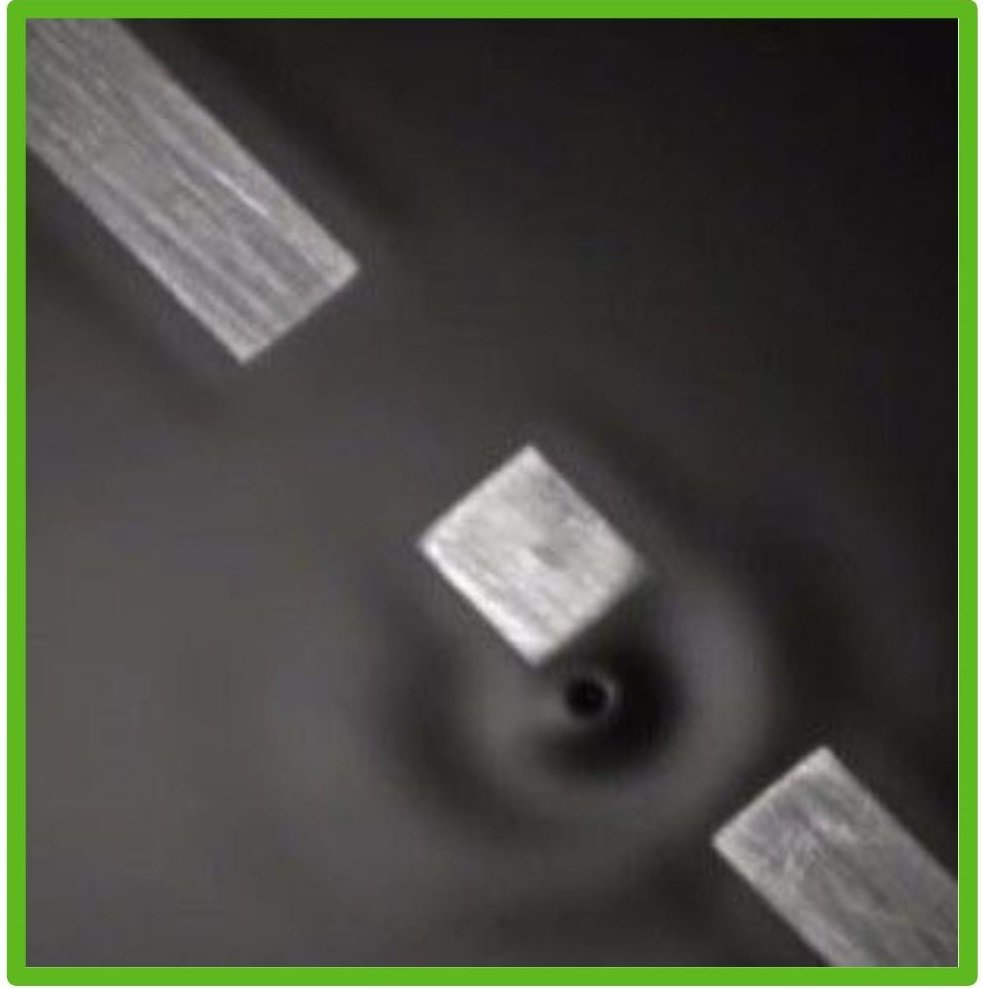 Later in 1986, John Bell, an Irish physicist known for his utterance, went further with setting up a high-impact theorem. In this sense, Bell supported the guide wave theory. Physicists have also misinterpreted this. He wrote of the guiding wave theory that "I see it as natural and simple, it solves the wave-particle dilemma in such a clear and customary way that it is very peculiar to me why it has been generally rejected." The term "I don't understand" was only used symbolically by Bell here, as he understood it very much. Statistical quantum mechanics has proven itself numerically well, making it more convenient for practitioners to remain there in the incomprehensible obscure zone. Now, decades later, the truth of guide wave theory has essentially been proven. Successful hydrodynamic experiments - bouncing oil droplets - essentially prove the truth of the guide wave theory. But again, the convenience of clinging to the usual old, inappropriate explanation prevails. Physicists are reluctant to move forward. Otherwise, researchers would risk their careers if they questioned quantum orthodoxy.                              [N.W.]

1. The origin of this dissertation was published in Science magazine on 30/06/2014. By Natalie Wolchover, wired.com